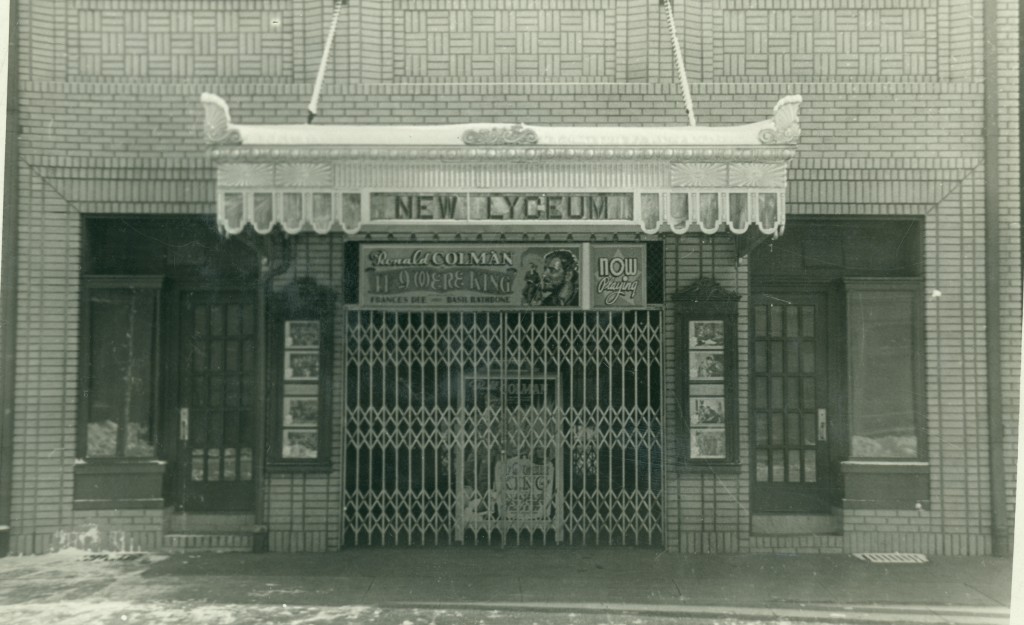 History of the Prince Theatre
by H. Hurtt Derringer

The Old Lyceum, the New Lyceum, the Chester Theater – they are ingrained in our memories. Movie houses were the stuff dreams were made of for a child growing up in America before the advent of television.

In downtown Chestertown, Maryland those movie dreams began at the turn of the 20th century. The departing Russell family brought the movie to town and the Prince family carried on the tradition before the close of the theater in 1993.

The second floor theater in the imposing building containing the Town Clock was “remodeled and greatly” improved at a cost of $15,000.00. Mr. Russell named his theatre the Chestertown Lyceum and appointed brother Fred S. Russell manager. On Saturday, September 4, 1909 the movie house opened for a 7:30pm show with an admission charge of five cents. A “new picture” was promised every night.

Within twenty years the growing popularity of moving pictures dictated that Mr. Russell purchase the butcher shop next door and build a new movie house. On October 25, 1928 the New Lyceum opened. Construction was strictly local. Plumbing and heating were by William C. Sutton. The oil burner heating system was installed by George W. Baldwin. Floor coverings and mezzanine suite furniture were from John Bartley & Son and G.E. Noland. A new piano was bought from W.P. Newnam. Plastering was done by the Coleman brothers of Rock Hall. Supervising construction was A.M. Culp. Seating capacity was 650 chairs with admission of 25 cents for children, and for adults 30 cents in the gallery, 35 cents in the balcony and 50 cents on the main floor.

The theater saw the advent of “talkies” and boomed along under the direction of Mr. Russell’s sons, the late Emerson R. Russell and Harry S. Russell until after World War II. Then it was leased to C.A. Wingfield and F.B. Klein in 1946. In 1957 C. E. Prince purchased the business. “Pete” Prince, who started in the movies in 1922 at the age of nine selling popcorn at a Nashville movie house, had never lost his love for the movies. He preserved the old theater until his death in 1988. Then his wife Kit kept it open until 1991.

Joyce Huber bought the property on Friday, March 15, 1991, remodeled the facility and opened it on Friday, May 17 with the Academy Award Winning “Dances With Wolves”.

It remained open for two years, three months and nine days, closing with John Grisham’s “The Firm” on August 26, 1993.[/two_third_last]