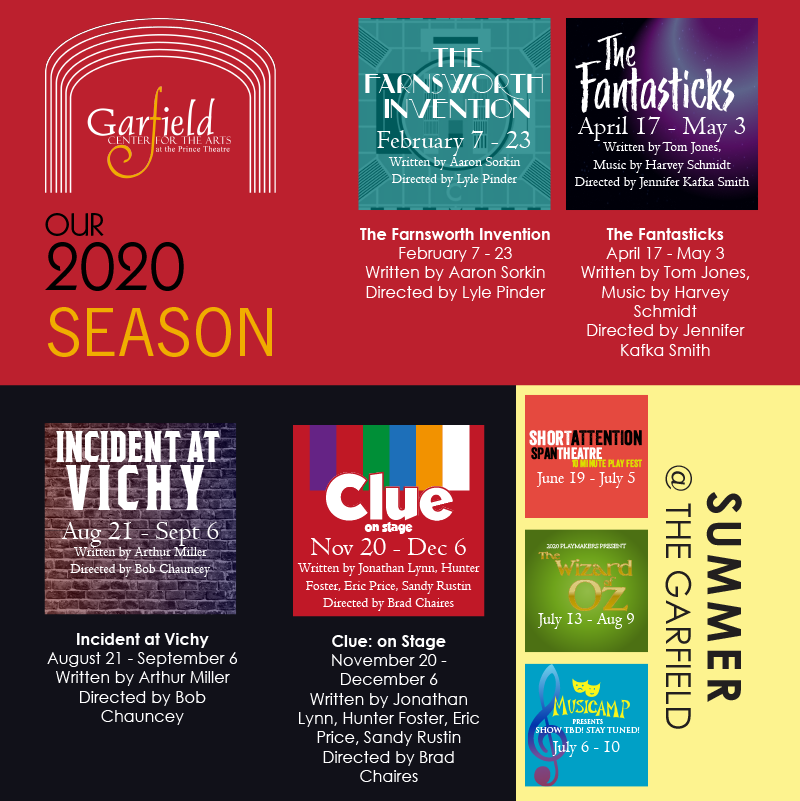 The Garfield Center for the Arts Announces Our 2020 Season

The Garfield Center for the Arts in Chestertown is proud to announce its 2020 season of theatrical productions. Presented by the Garfield and directed by a group of talented local directors, this season offers a variety of shows – sensational drama, romantic musical, moral examination and a madcap comedy. MUSICAMP runs from from July 6-10 followed by Playmakers summer theatre camp from July 13 – August 9 culminating in a production of the children’s classic The Wizard of Oz.

The season opens February 7 with The Farnsworth Invention written by Aaron Sorkin and directed by Lyle Pinder. It’s 1929. Two ambitious visionaries race against each other to invent a device called “television.” Separated by two thousand miles, each knows that if he stops working, even for a moment, the other will gain the edge. Who will unlock the key to the greatest innovation of the 20th century: the ruthless media mogul, or the self-taught Idaho farm boy?

In April, director Jennifer Kafka Smith will present The Fantasticks written by Tom Jones with  music by Harvey Schmidt. The Fantasticks is a funny and romantic musical about a boy, a girl, and their two fathers who try to keep them apart. The narrator, El Gallo, asks the audience to use their imagination and follow him into a world of moonlight and magic. The boy and the girl fall in love, grow apart and finally find their way back to each other after realizing the truth in El Gallo’s words that, “without a hurt, the heart is hollow.”

Short Attention Span Theatre, the Garfield’s own ten-minute play festival, opens its sixteenth year in June. Produced by Mark Sullivan and Diane Landskroener, “SAST” runs from June 19 – July 5. An audience favorite, SAST features the local talents of dozens of directors, writers and actors, and is designed to hold your attention for Just. Long. Enough.

In one of the clearest and most urgently moral plays by the greatest American moral dramatist, Incident at Vichy is a tense, incisive examination of the choices each of us can make—and how we assuage our consciences—when our own society asserts domination over those considered “other.” Set in 1942. The detention room of a police station in the occupied Vichy Zone. Eight men have been picked up for questioning, for the reason everyone knows but can’t begin to consider. As details of the consequences of the occupation, and of the Nazis’ Racial Program, begin to emerge, each man must consider for himself how he responds. Director Bob Chauncey brings this Arthur Miller play on stage in August.

Closing the 2020 season, first time director Brad Chaires will bring the madcap comedy, Clue, to the Garfield stage from November 20 – December 6. Written by Jonathan Lynn, Hunter Foster, Eric Price, Sandy Rustin. It’s a dark and stormy night, and you’ve been invited to a very unusual dinner party. Each of the guests has an alias, the butler offers a variety of weapons, and the host is, well . . . dead. So whodunnit? Join the iconic oddballs known as Scarlet, Plum, White, Green, Peacock, and Mustard as they race to find the murderer in Boddy Manor before the body count stacks up. Based on the cult classic film and the popular board game.

The Garfield Center for the Arts is a non-profit organization whose mission is to invigorate the cultural life of our community by nurturing, celebrating and supporting arts and artists through performance and education. For more information on happenings at the theatre, sponsorship opportunities or tickets, please visit www.GarfieldCenter.org, or call the box office at 410 810 2060. The Garfield Center for the Arts at the Prince Theatre is located at 210 High Street, Chestertown, MD, 21620.