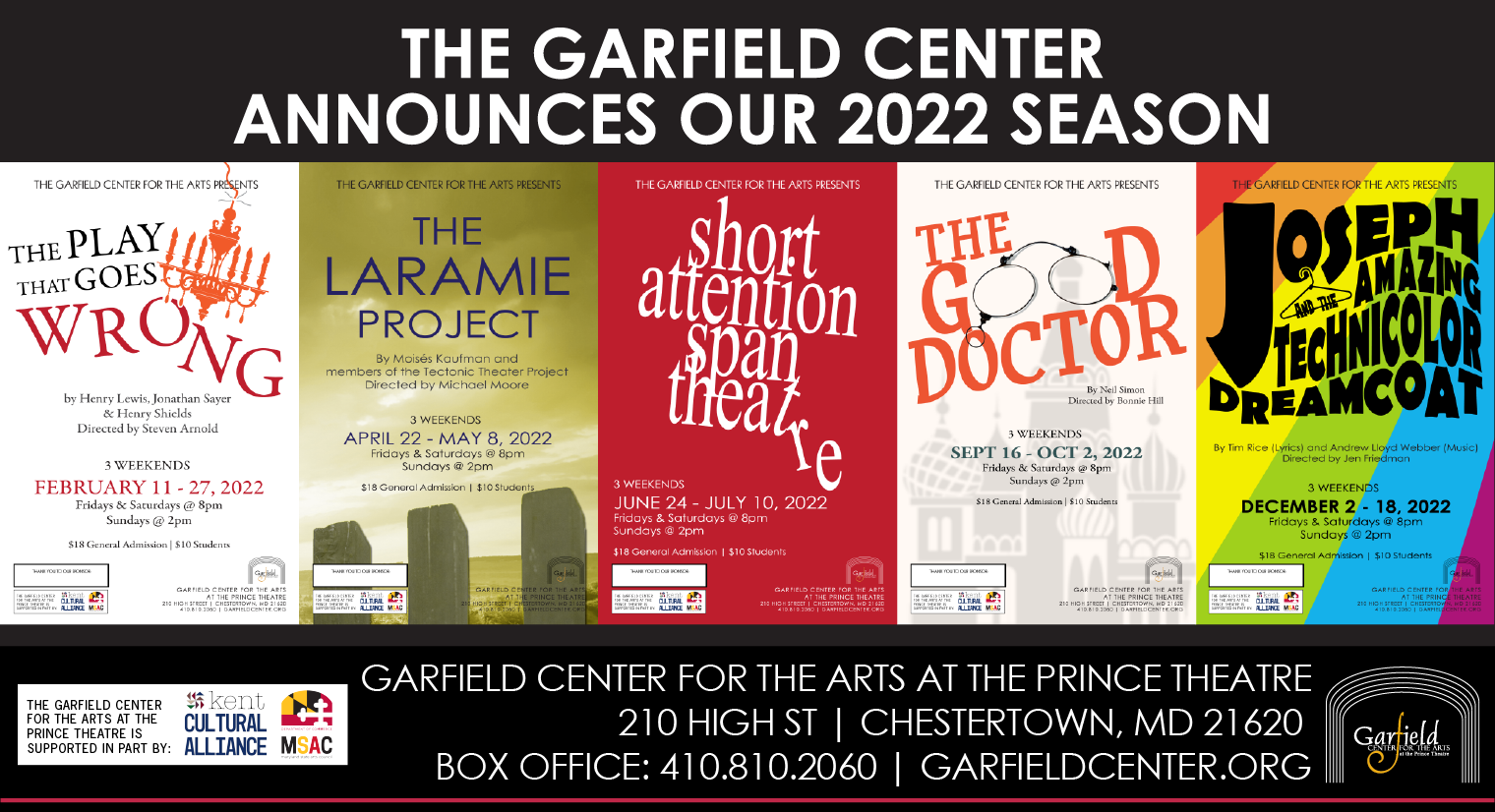 The Garfield Center for the Arts has finished planning for its first full slate of theatrical productions since 2019.

According to a news release, the 2022 season will feature two comedies; a thought-provoking and well-timed drama; a big, splashy, family-friendly musical; and the return of everyone’s favorite annual short play festival.

Starting off the 2022 season with a bang will be “The Play That Goes Wrong,” an outrageous comedy by Henry Lewis, Jonathan Sayer and Henry Shields. The production will be directed by GCA Executive Director Steven Arnold.

Performances will run weekends from Feb. 11 through Feb. 27.

A smash hit farce and worldwide phenomenon, welcome to opening night of the Cornley University Drama Society’s newest production “The Murder at Haversham Manor,” where things are quickly going from bad to utterly disastrous.

On the surface, this seems to be a 1920s whodunit. But the play is really about the actors attempting to perform it, because in this laugh-a-minute comedy, featuring an unconscious leading lady, a corpse that can’t play dead, falling set pieces and actors who trip over everything (including their lines), absolutely everything that can go wrong in the performance does, indeed, go wrong.

The accident-prone thespians will attempt to battle against all odds to make it through to their final curtain call, with hilarious consequences along the way. Part “Noises Off,” part “Monty Python,” this Olivier Award–winning comedy is guaranteed to leave audiences in stitches.

Coinciding with Chestertown’s Pride Festival is “The Laramie Project,” written by Moisés Kaufman and members of the Tectonic Theater Project. The production will be directed by Charles Michael Moore.

Performances will run weekends from April 22 through May 8.

The play is a deeply moving portrait of Matthew Shepard, Laramie, Wyo. and a terrible crime that made an indelible mark on the American psyche.

Playwright Moisés Kaufman and fellow members of the Tectonic Theater Project made six trips to Laramie over the course of a year and a half, in the aftermath of Shepard’s beating and during the trial of the two young men accused of killing Shepard. They conducted more than 200 interviews with the people of the town, and the result is a breathtaking collage that explores the depths to which humanity can sink and the heights of compassion of which we are capable.

In September, the GCA will present the Broadway comedy hit “The Good Doctor.” Written by Neil Simon and directed by Bonnie Hill, it is a funny and clever marriage between Simon’s snappy dialogue and the sometimes outrageous, sometimes wistful, often ironic works of Anton Chekhov.

The stories are droll, the portraits affectionate, the humor infectious and the fun unending.

In one sketch, a government clerk over-apologizes and has a nervous breakdown after accidentally sneezing on a general during a night out at the opera. In another sketch, a crafty seducer goes to work on a wedded woman, only to realize that the woman has been in command from the first overture. And then there’s the visit to the chair of a frighteningly overzealous dentist. And let us not forget the classic tale of a man who offers to drown himself for three rubles.

Closing the season in an absolutely spectacular way, GCA’s good friend Jen Friedman will take up the directing mantle as the theater brings the glory and pageantry of the hit musical “Joseph and the Amazing Technicolor Dreamcoat” to the stage.

Written by Tim Rice and Andrew Lloyd Webber, the show features a smash hit score, which includes the memorable songs “Close Every Door” and “Any Dream Will Do.”

Told entirely through song with the help of a narrator, the musical follows preferred son Joseph who, after being sold into slavery by his brothers, ingratiates himself with Egyptian noble Potiphar but ends up in jail after refusing the amorous advances of Potiphar’s wife. While imprisoned, Joseph discovers his ability to interpret dreams, and he soon finds himself in front of the mighty but troubled, Elvis-inspired, Pharaoh. Joseph’s solution to Egypt’s famine elevates him to Pharaoh’s right-hand man and reunites him with his family.

This family-friendly event, which will have you singing and tapping your feet long after its final curtain, runs weekends from Dec. 2-18.