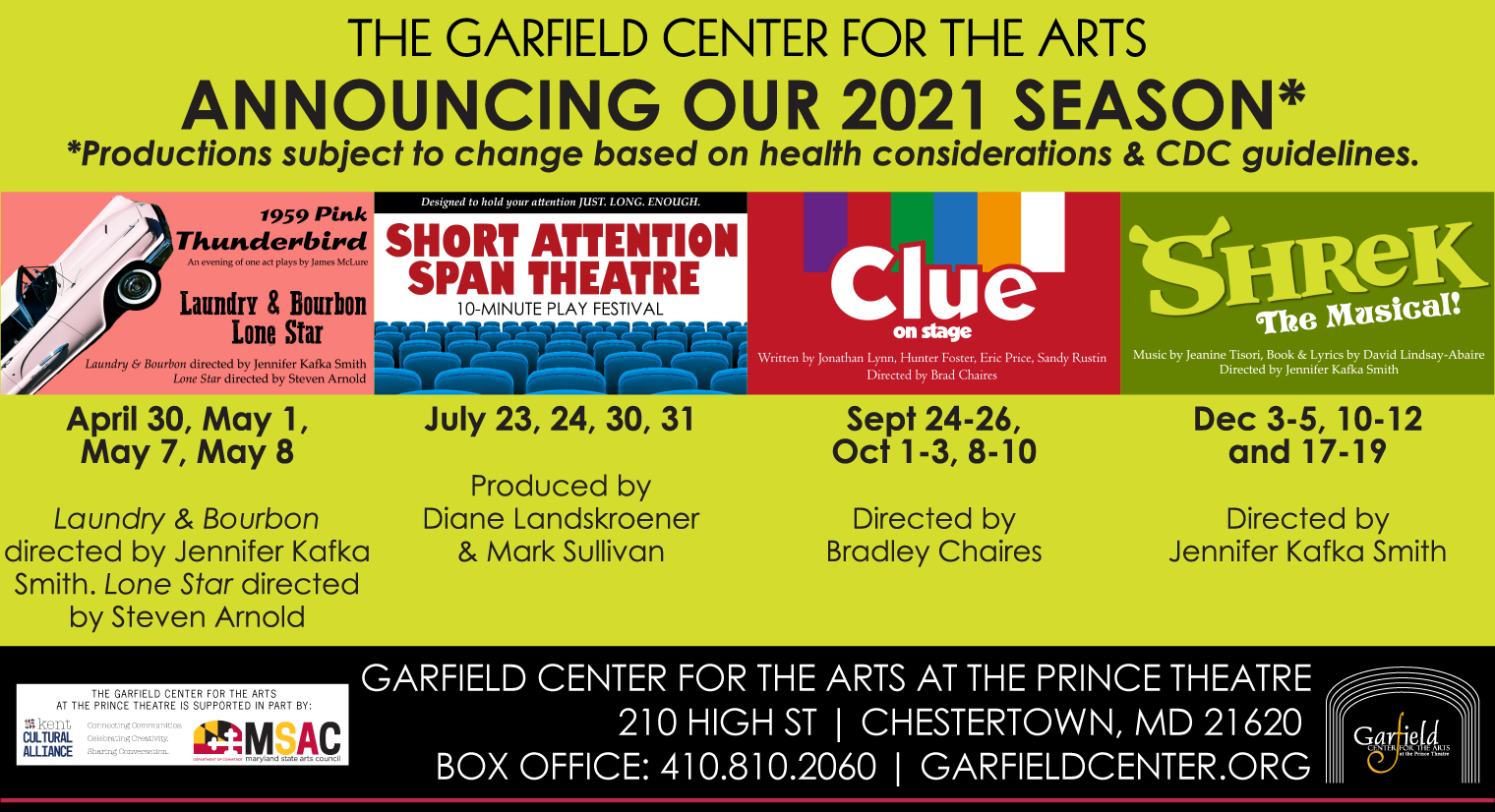 In a plan to bring back live performances to their stage, the Garfield Center for the Arts has announced a season of theatrical programs for 2021 that includes 2 full length plays, another installment of Short Attention Span Theatre, and a musical to finish the season.

Opening the season is the previously announced 1959 Pink Thunderbird. Running for a total of 4 performances on April 30, May 1, May 7 and May 8, the production will be streamed live from the stage for online ticket buyers only. There will be no live audiences inside the theatre. Written by James McLure, the program features two separate one acts whose characters, settings and events are related to one another. It shows two sides of the same coin. In the first, Laundry and Bourbon, Elizabeth, Hattie and Amy Lee confront with humor the difficulties of relationships and how far someone should go to accept the flaws of someone they love. In the second, Lone Star, Roy, Ray and Cletis face some devastating revelations with pathos and humor on their way to determining and embracing what are the most important aspects of their lives. Jennifer Kafka Smith directs Laundry and Bourbon and Steven Arnold directs Lone Star. The production contains mature themes and language, and tickets, which are already on sale, can be purchased at garfieldcenter.org/pinkthunderbird.

The 2021 edition of Short Attention Span Theatre will be a live outdoor event for live audiences. Taking place July 23, 24, 30 and 31, it will once again feature a collection of 10-minute plays that will include premieres by local playwrights. The location for the outdoor event is still to be determined.

Opening September 24, and running three weekends will be the stage comedy Clue. Written by Sandy Rustin, based upon the works by Jonathan Lynn, and with additional materials by Hunter Foster and Eric Price, the production was previously planned for the 2020 season but was cancelled due to the pandemic. Based on the iconic 1985 Paramount movie which was inspired by the classic Hasbro board game, the tale begins at a remote mansion, where six mysterious guests assemble for an unusual dinner party where murder and blackmail are on the menu. When their host turns up dead, they all become suspects. Miss Scarlett, Professor Plum, Mrs. White, Mr. Green, Mrs. Peacock, Colonel Mustard and Wadsworth, the butler, race to find the killer as the body count stacks up. Bradley Chaires will direct the comedy which runs September 24, 25, 26, October 1, 2, 3, 8, 9 and 10.

Shrek The Musical will end the 2021 Garfield Center for the Arts season. “Once upon a time, there was a little ogre named Shrek….” And thus begins the tale of an unlikely hero who finds himself on a life-changing journey alongside a wisecracking Donkey and a feisty princess who resists her rescue. Throw in a short-tempered bad guy, a cookie with an attitude and over a dozen other fairy tale misfits, and you’ve got the kind of mess that calls for a real hero. Luckily, there’s one on hand… and his name is Shrek. Based on the Oscar-winning DreamWorks Animation film, Shrek The Musical is a Tony Award-winning fairy tale adventure, featuring songs by Jeanine Tesori and a book by David Lindsay-Abaire. Jennifer Kafka Smith will direct the production which will run December 3, 4, 5, 10, 11, 12, 17, 18, 19.

The Garfield Center has planned contingency titles for the September/October and December production slots should health and safety regulations prevent a return to live audience events. The Garfield Center will make an additional announcement later in the season should it become necessary to make that adjustment.