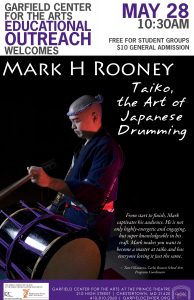 Taiko Drumming at the Garfield on May 28
GET YOUR TICKETS NOW!

The spring installment of the Garfield’s Educational Outreach Program features Mark H. Rooney, described as “the world’s most dangerous half-Scottish/half-Japanese solo taiko artist”, in a performance that is open to the public on May 28th at 10:30am.

Taiko is a dynamic form of full-body drumming based in Japanese tradition. Based in the Washington, DC area, Rooney’s credits as a performing artist span multiple continents and genres. He began his taiko career in Boston, MA as a performing member of Odaiko New England in 1998. He has since performed with a number of groups in Japan as well as performing widely in Europe and the United States as a touring member of Taikoza. Mark has also collaborated with other artists and groups including Tiger Okoshi, Opera unMet, UpRooted Dance, and Arts on the Horizon.

In addition to serving as Odaiko New England’s Artistic Director from 2008 – 2010, Rooney was the principal architect and instructor for their classes and workshops. He has also taught in after-school programs and colleges (including as the founding instructor for Wesleyan University’s popular taiko program), as well as the Mark H. Rooney Taiko School for his growing number of students in the DC area. Since moving to DC in 2011, he continues to teach ongoing weekly classes, offer special workshops several times each year, and perform for a wide variety of audiences ranging from school children to diplomats.

The Educational Outreach Programs at the Garfield Center are sponsored by the Kent County Arts Council.  General admission is $10, with FREE admission for school groups. Please contact Tess Hogans (thogans@garfieldcenter.org or 410-810-2060) for more information. The Garfield Center is located at 210 High Street in Chestertown.