An event every week that begins at 2:00 PM on Friday and Saturday, repeating until February 26, 2023 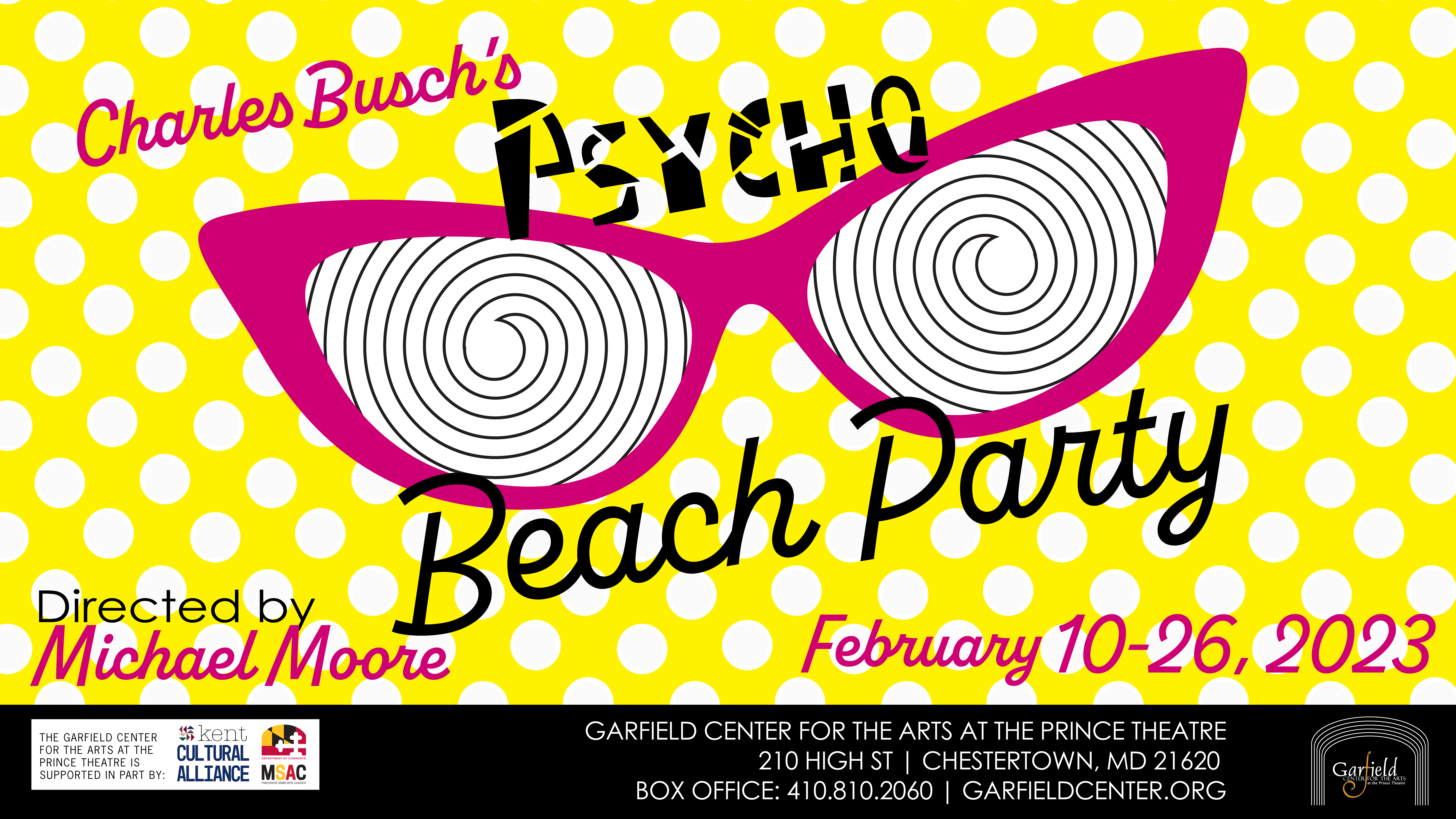 Charles Busch is the ultimate in off-beat playwrights. He is the author and star of over twenty-five plays including “The Divine Sister,” “The Lady in Question,” “Red Scare on Sunset,” “The Tribute Artist,” “The Confession of Lily Dare” and “Vampire Lesbians of Sodom;” one of the longest running plays in the history of Off-Broadway. His play “The Tale of the Allergist’s Wife” ran for 777 performances on Broadway, winning the Outer Circle Critics’ John L. Gassner Award for playwriting, and receiving a Tony nomination for Best Play. He also wrote and starred in the film versions of his plays “Psycho Beach Party” and “Die Mommie Die,” the latter of which won him the Best Performance Award at the Sundance Film Festival.

“Psycho Beach Party” is an accurate title for the zany, strange and hilarious play the title represents. Call it Gidget with a personality disorder, or Frankie and Annette go insane, either of which give a sense of the style, wit and comedy of the play. Embracing the era of Hollywood beach movies, it is a parody of 1950s psychodramas, 1960s beach movies and 1980s slasher films. In the plot, Florence Forrest is a Gidget-like character determined to learn to surf, and earns the nickname “Chicklet” from the surfer guys. However Chicklet begins displaying multiple personalities, among them a check out girl, an elderly radio talk show hostess, a male model named Steve and the accounting firm of Edelman and Edelman. Her most dangerous alter ego is a sexually voracious vixen named Ann Bowman who has nothing less than world domination on her mind! Chicklet experiences inexplicable blackouts, and fears that she might be the one responsible for a series of mysterious murders in her beachside town. Hilarity ensues as mischief, madness and the passionate pursuit of the perfect wave delight the audience as beach blankets and Hitchcockian psychological suspense thrillers are tossed around in this rollicking, zany comedy.

The Director of the production is Michael Moore, who directed last season’s Garfield production of “The Laramie Project.” His casting embraces the switched gender aspect of most of Charles Busch’s plays. Chicklet will be played by J.W. Ruth, most recently seen as Joseph in “Joseph and the Amazing Technicolor Dreamcoat” this past December on the Garfield stage, and scene-stealing Max in “The Play That Goes Wrong” in the opener of the 2022 season at the Garfield. Patrick Pearce, also seen in “Joseph” and “The Play That Goes Wrong” plays Yo-Yo. Dominic Delcoco, who played Gingy in “Shrek” in 2021 and one of the brothers in “Joseph,” plays Star Cat. Dylan Lyles, who appeared in “Shrek,” “The Laramie Project” and “The Good Doctor” at the Garfield plays Provoloney. The Great Kanaka is played by Garfield favorite Brad Chaires, most recently seen in “Joseph” playing Potipher, the Elvis-like Pharaoh and one of the brothers. Brianna Johnson, last seen in “The Good Doctor” and “The Laramie Project” plays Berdine. Minnie Maloney, last seen on the Garfield Stage in “The Good Doctor” plays Marvel Anne, Connie Fallon, last seen in “Shrek,” plays Mrs. Forrest, and newcomer Cassi Pinder plays Bertina Barnes.

Director Moore is assisted in the production by costumer Connie Fallon, with props by Wendy Sardo, lighting by Butch Clark, sound design by Nic Carter, motion graphic projections by Steven Arnold, sound board execution by Jordan Dixon, photography by Steven Arnold, and print graphics, playbill and marketing by Francoise Sullivan.

The show opens February 10th and runs weekends through February 26th, with performances at 8:00 PM on Fridays and Saturdays and 2:00 PM on Sundays. Tickets are already available online and can be purchased through our website at www.garfieldcenter.org or by calling the Box Office at 410-810-2060 on Wednesdays through Fridays from 10:00 AM to 3:00 PM.