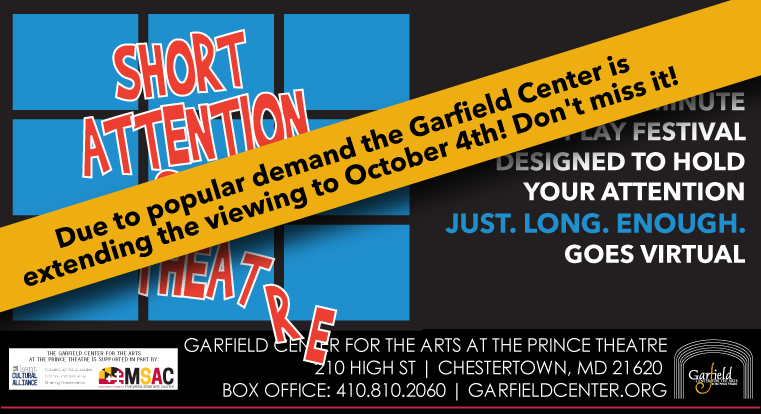 Join us for an engaging evening of 10-minute plays, designed to hold your attention for just. long. enough.

THANK YOU for supporting The Garfield Center for the Arts with your ticket purchase for SHORT ATTENTION SPAN THEATRE 2020 ONLINE!

The presentation will be viewable at any time beginning at 7 PM on Friday, September 18, and ending Sunday, September 27. Should you decide to wait until Sunday, Sept. 27 to view the program, you should start it no later than 10 PM because the video will be taken down that night at midnight.

You will receive your purchased link to the unlisted YouTube page via email on Friday, September 18. It will arrive no later than 6 PM that evening. The link can be used once or multiple times by the purchaser during the 2 weekend run of the show and anytime in the week in between. YOU MUST HAVE AN EVENTBRITE ACCOUNT TO ACCESS THE EVENT.

Because of the devastating effect Covid 19 has had on our revenue, the Garfield Center for the Arts’ livelihood, now and in the future, is more dependent than ever on the financial success of events like this. Once you have received the YouTube link, we ask for your cooperation in restricting its use to only you and your household. The GCA greatly appreciates your consideration and assistance on this.

Why did the chicken cross the road? How strange can it get when two friends decide to debate pizza, philosophy and the nature of debate itself? When is a simple marketing flyer anything but a simple marketing flyer? What could possibly be the harm in a lovely cup of tea among friends? Would you hire an odd and overqualified applicant for a job in a burger joint? We’re all locked down in our homes with our beloved families — but, where do we go when we need to get away from our beloved families? All of these intriguing questions will be given very entertaining answers in The Garfield Center for the Arts’ upcoming SHORT ATTENTION SPAN THEATRE ONLINE 2020 starting September 18th.

A long tradition that has its earliest roots in 2005, when it was called “8×10 – The 10-Minute Play Project,” “Short Attention Span Theatre” (as it came to be known starting in 2008) has been a successful, yearly short play festival that has grown every year in attendance and popularity.

This year’s online SAST will mark the first time in which all of the plays will be from local writers. Those plays include “A Room of My Own,” by Elkton’s Michael Collins, two plays, “Act Now!” and “Two Broody Hens,” by Rich Pauli of Annapolis, “Job Interview,” by Dover’s Howard Mesick, “The Tea Drinkers,” by Worton’s Mark Sullivan, and “Epistemology” by Chestertown’s Steven Arnold.

Questions should be addressed to sast@garfieldcenter.org.

Help keep the arts alive! Make a donation today by clicking on the PayPal button below:   Please subscribe to our email list to be notified of future updates: