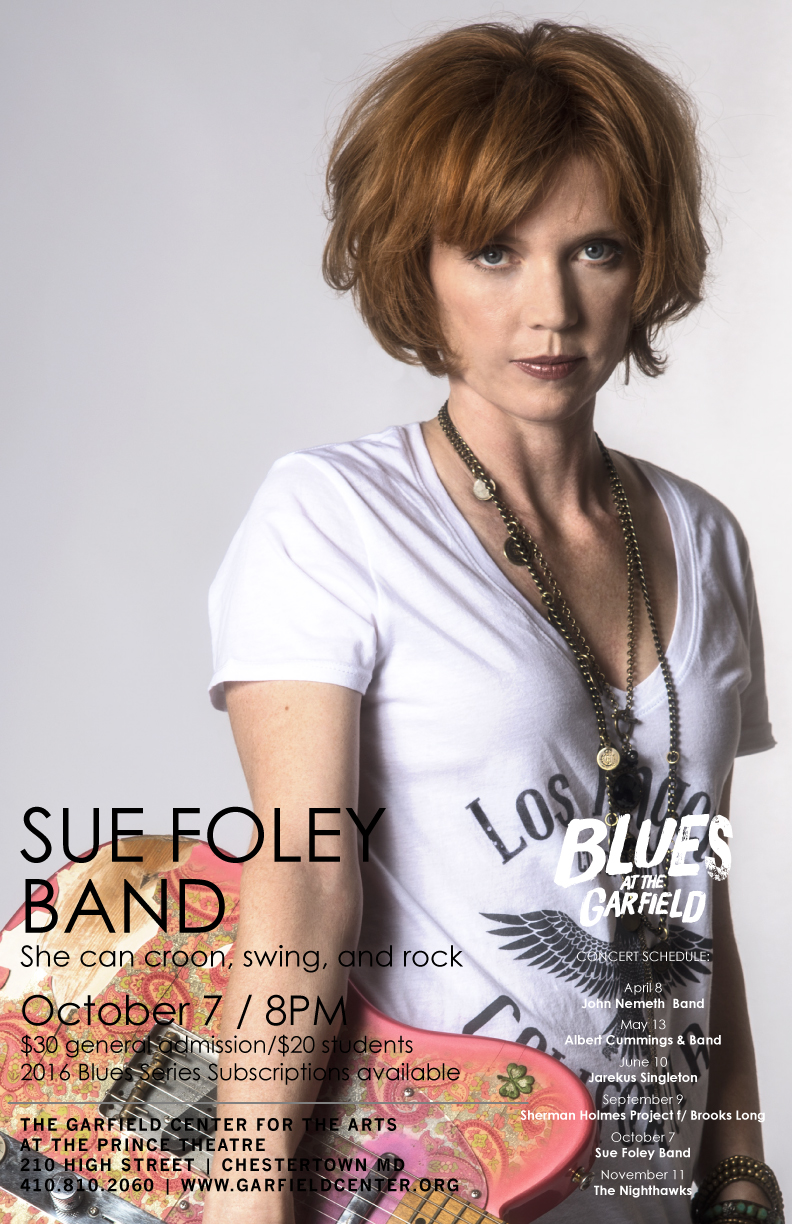 BioVideoWebsite
Sue Foley is a multi-award winning musician and of the one of the finest blues and roots artists working today. Foley spent her early childhood in Canada, mesmerized by her father’s guitar and started her professional career at sixteen. By twenty-one, she was living in Austin, TX and recording for Antone’s—the esteemed blues record label and historic nightclub that helped launch the career of Stevie Ray Vaughan. Foley’s first release, Young Girl Blues, quickly rooted her unique talents as a proficient blues guitarist/singer/songwriter and launched her out on the road—working and sharing the stage with greats such as BB King, Buddy Guy, Joe Cocker and Tom Petty. In 2001, she won the prestigious Juno Award (Canadian equivalent of the Grammy) for her CD, Love Coming Down. Foley also holds the record for the most Maple Blues Awards (seventeen) and has earned three Trophees de Blues de France. She has also garnered several nominations at the International Blues Music Awards in Memphis, TN.

Foley is an accomplished and award winning songwriter. Her music has been featured in the major motion picture You Can Count On Me and she also contributed the theme song, “Two Trains,” for the internationally syndicated television series Just Cause. She has been featured numerous times in major print publications including The New York Times, The Los Angeles Times, The Toronto Globe and Mail, The National Post, Downbeat and Mojo Magazine, and has performed and been featured on nationally syndicated radio shows: House Of Blues, Sirius-XM’s BB King’s Bluesville, CBC’s Saturday Night Blues, NPR’s Mountainstage, West Coast Live, Kentucky Woodsongs and Beale Street Caravan.

In 2001 Foley started a project called Guitar Woman based around dozens of interviews she conducted with the world’s leading female guitarists. For eight years she wrote articles, organized and promoted concerts, and worked on a book—fueling her passion for gender studies in music and her desire to bring the work of great women guitar players to light. The Guitar Woman project entered a period of dormancy from 2009-2015 while Foley pursued several musical collaborations and returned to university to get her graduate’s degree.

When she’s not recording or performing internationally, Foley is a Professor of Music. Her specialty is teaching courses related to the roots of American music, creativity, musician entrepreneurship, and empowering women musicians. In her spare time, she studies the cello, reads voraciously, continues to work on Guitar Woman and is planning on pursuing her PhD.