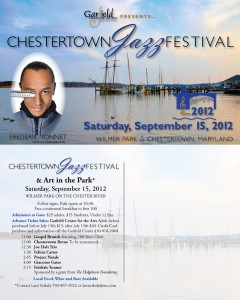 The Garfield Center of the Arts, local jazz lovers, and resident philanthropists will sponsor the comeback of the Annual Chestertown Jazz Festival which enjoyed a ten year run from 1996-2006 on the waterfront in Chestertown with BMW of North America as the major sponsor. This year the festival is scheduled for Saturday, September 15, 2012 and welcomes the return of ‘ Art in the Park’ usually held simultaneously  in the Fountain Park.

The Chestertown Jazz Festival was founded in 1996 by Kent County resident and current Garfield Center board member,  Dr. Melvin S. Rapelyea. The practicing Radiologist and jazz aficionado has returned from seven years as Chief of Radiology at The Cookeville Regional Medical Center, in middle Tennessee to return to the Chester River Health System, where he worked previously from 1991 to 2000. His initial involvement was as board member of The Native and African American Cultural Activities Museum.” The festival was a means of raising money and promoting cultural awareness and diversity in the region.” as said by the founder.  The event, going forward will exclusively benefit the Performing Arts Center, formerly The Prince Theatre.  The mission of the Garfield Performing Arts Center  is to enhance  Maryland’s upper eastern shore community through arts,  entertainment, cultural enrichment and performing arts education.

“The Garfield Center is excited about the return of the jazz festival to Chestertown. Our organization will support the producers in any way to make this a successful, fun event for our community.” says Philip Dutton, the President of the Board of Directors.

The festival features prominent local musicians who will perform on the Chester River Waterfront at Wilmer Park.  This comeback event will begin with a ‘Gospel Brunch’ featuring a local ‘Hundred Voice Gospel Choir.’

For the first time, two international stars will perform on the stage at the waterfront.

Parisian born,  Frederic Yonnet, an Urban Jazz Harmonicist returns to Chestertown to headline the event. He made his debut in Chestertown at the ‘Downrigging Weekend 2011’ when he thrilled and surprised all with his magical, musical genius, belting notes through  his ‘mouth organ’ to exciting  beats.

The second internationally acclaimed performer will be Giacomo Gates, “a bepop and blues singer, keeping the tradition of Eddie Jefferson alive and well.”  Giacomo performed at two of the prior jazz festivals and will return on September 15th.

Additional performers will include The Kent County High School Jazz Band, The Eastern Shore Wind Ensemble, The Washington College Jazz Band, Felicia Carter, and Project Natale.  There is talk of a collaboration with the National Music Festival which will be in town this summer (June 3-16) The National Music Festival brings together world-class music teachers from major orchestras, chamber ensembles and conservatory faculties with gifted pre-professional student musicians.

Tickets will be as follows: April 30th until July 15th, $15 per adult, under 12 free. Advance sales only by phone or online. Garfield Center for the Arts 410-810-2060 or http://garfieldcenter.org.  After July 15th until the event, $20 on line or by phone. $25 at the gate on September 15th. No refunds will be issued. The event is rain or shine. If necessary bring umbrellas and rain gear. For more information about the festival visit the event listing page.