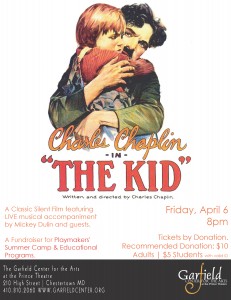 Friday, April 6th, it’s all about The Kid(s) at The Garfield Center for The Arts when Mickey Dulin pairs his original piano score with Charlie Chaplin’s classic film THE KID to raise money and support for Playmakers’ educational programming.

THE KID, Chaplin’s first full-length movie, was the second-highest grossing film in 1921 and in 2011, was selected for preservation in the United States National Film Registry by the Library of Congress as being “culturally, historically, or aesthetically significant.” The simple, engaging story follows an abandoned kid found by a tramp, played with the usual acumen by Charlie Chaplin. The two characters form a bond which rests on small everyday scams and tricks to earn a few pennies or a loaf of bread, but when the mother, now an affirmed opera singer, finds out that her kid is still alive, drama ensues. In spite of being 91 years old, this movie is a masterwork and still delights with its clever mix of comedy, drama and good feelings. It is recommended for all ages, from young kids (if you manage to convince them to watch a silent movie!!) to adults who are seeking true storytelling that spans.The film experience will be enhanced by an original score created by Mickey Dulin and musical accompaniment provide by special guests.

Mickey Dulin proposed this fundraiser project to The Garfield noting that its “natural fit with Playmakers makes it a win-win project.” Mickey Dulin, a Sudllersville native well known for his musical accompaniment to silent films, admires and respects Chaplain’s genius and chose The Kid because it “shares an affinity with Playmakers.”  The Garfield/Prince has been conducting educational programming in the upper eastern shore region since 2004, offering a highly regarded summer camp and seasonal workshops for youth. Funds raised for this program help subsidize tuition for local youth. Through carefully planned curriculum, all youth participants, referred to as PLAYMAKERS, are engaged  physically, mentally and artistically – providing practice in the areas of improvisation, movement, character development, self presentation, script building, critical thinking, and collaborative problem solving. “This is entertainment that a child can bring his parents to,” says Mickey Dulin.

“If you’ve never seen Mickey Dulin and Charlie Chaplin perform their duet, you are in for a treat,” states Lucia Foster, Executive Director of The Garfield and creator of Playmakers’ Summer Camp.  “Mickey’s talent seems to blossom through being paired Charlie Chaplin’s antics and the genre of silent film.  This type of performance is a perfect fit for our theatre and I’m encouraged that our Playmakers are the inspiration.”

Also available at The Garfield on April 6th – meet some Playmakers whose lives have been enhanced thanks to their involvement in Playmakers’ programming.  Plus, learn more about The Garfield’s first International Artists in Residence Program featuring Indian Filmmaker Preeya Nair of Flying Elephant Films (www.flyingelephantfilms) who will be offering educational programming for Playmakers the first week of June.