“Our 2015 season is dedicated to the memory of Vincent Raimond, former Executive Director of the Kent County Arts Council, founder Actors Community Theatre (A.C.T.), patron of the arts and friend to all artists.” 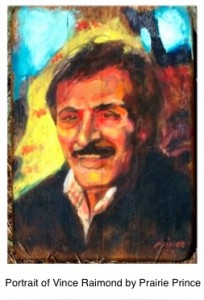 My first real contact with Vince Raimond occurred when I was just five. There was a birthday party for his son Larry, which I remember distinctly because I got hit square in the nose with a baseball, my first bloody nose ever! It was to be one of many memorable firsts which I now associate with Vince, the others much less traumatic than a kid’s first bloody nose, though no less significant. Years later, my wife Diane and I became very closely associate with Vince and Leslie when several of us came together to create Actors Community Theater in the early ’80s. Vince was our producer, coach, godfather, cheerleader, scold, mentor and friend. Vince was a true believer in the elevating power of art, and he saw in our merry band of actors a way to bring enriching theatrical experiences to a small, somewhat isolated community.

ACT’s home base for many years was the small stage in William Smith Hall at Washington College, but he made sure that we could mount productions on flatbed trailers that could be hauled around to public parks in Millington, Rock Hall, and Chestertown. In Vince’s mind, our “mission” included presenting live theater to people that may not otherwise have access to it. Vince also felt that every production was as important to the amateur actors as it was to the audience. Whether we were presenting something serious and profound, like Tennessee Williams, or something as whimsical as classical commedia dell’arte (with authentic masks, no less!) or whether we were corralling a dozen five-year-old mushrooms and recalcitrant lost boys during a performance of Peter Pan, Vince’s goal and vision was always to emphasize “the experience.”

Vince was our magus, a stern but benevolent sorcerer who guided ACT into performing feats of magic. And through it all, the most important thing that we as performers could hope to see was the look of delight on Vince’s face when the magic actually happened.