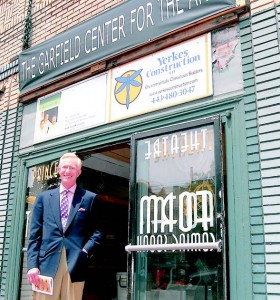 CHESTERTOWN – The Prince Theatre is well on its way to becoming much more than the local performance stage. Its lobby is undergoing a renovation, which might more aptly be called a transformation. The members of the theater’s foundation have lofty  goals for its future.  And it has the support of Matthew Garfield.

A member of the theater’s board for the last five years, Garfield had planned on perhaps making a $10,000 capital campaign donation, which, to most people, is more than generous. But, over coffee with the theater’s former executive director John Schratwieser, that $10,000 multiplied to a $200,000 naming opportunity. And, Garfield said Friday, “When all is said and done, it’s going to be more like a $400,000 naming opportunity,” jokingly adding he had to get a second job to afford it.

Thus the theater is now the Garfield Center for the Arts at the Prince Theatre.

But more important than the dollar amount he donated is Garfield’s vision for the center’s role in Chestertown, and his overall love for theater, which he said stems from “that unique bond between the audience and performer you can’t replicate anywhere. … The performer bares their heart trying to please the audience.”

Garfield, 63, has worn many hats in the theater world. He has served on a number of boards, is president emeritus of Philadelphia’s Walnut Street Theatre and has produced or invested in countless Broadway and off-Broadway shows.

He is especially proud of his role as co-producer of Rodgers and Hammerstein’s “State Fair” in 1995 and as associate producer of “I Love You, You’re Perfect, Now Change,” which had an 11-year run at the West Side Theater in New York City. Garfield is also a performer and member of the Screen Actors Guild.

“I have ceased Broadway theater investment and gone back to my first love – nonprofit theater,” he said.

Garfield said there is something very special about nonprofit theatre: “There’s a lot of folks that don’t do (theatre) professionally that are every bit as talented as stars on Broadway or in Hollywood or London. And – for whatever reason, that they didn’t choose to do it professionally or didn’t have the opportunity to do it professionally – a venue like the Garfield Center for the Arts will give these folks an opportunity to do what they love doing and what they do so well.”

It was his involvement in the nonprofit Walnut Street Theatre in Philadelphia, his hometown, that led Garfield to the Prince Theatre. The man who succeeded him as chairman of the Walnut Street Theatre, Lou Fryman, makes his home on the Chester River. About five years ago, when Fryman was chairman of the Prince, he asked Garfield to serve on the board.

Garfield has a home on the Chester River as well, but still works as president and CEO of Garfield Refining Company in Philadelphia, a company founded by his grandfather in 1892.

While he and his wife, Marie, live part-time in Philadelphia, when they bought their home in Chestertown about seven years ago, “We virtually gave up our social life in Philadelphia because we loved it so much down here.”

Garfield has been very involved with the lobby renovation and has a certain vision for the theatre, but also has a vision for the town. “We’re trying to make Chestertown a center of culture. I feel the culture in general and theater in particular is essential for the fabric of any community.”

And while he said he feels fortunate to have been able to make such a substantial contribution, he believes it is important for all the people of the community to support the ideas of culture and theater and to make any donation they can. 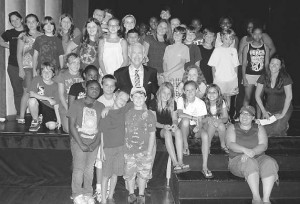 “I’d like everyone in the town and the area to be stakeholders in this. It’s an honor and a thrill to have my name over the entrance, but this is for everyone,” he said.
In an effort to truly make the theater for everyone, Garfield hopes to see “Black Nativity,” a gospel take on the nativity story, come to the Prince stage. He said one of his priorities, and that of the board, is for the black community to embrace the theater.

For many years, the theater was for “whites only.” When it was opened to blacks, they had to use a separate staircase and sit in the segregated balcony. The theater was eventually desegregated. Garfield said he understands the black community’s reluctance to return to a theater that was once segregated, but hopes things will change in these modern times.

“We want African American performers in our shows and African American folks in our audiences. Everyone in the community should know they’re not only welcome, but it would be our greatest joy if they come to the Garfield Center for the Arts,” he said.

In another effort to show the commitment Garfield and the theater board have to the community, Sue Matthews, chair of the grand re-opening committee, said, “We want everybody to enjoy this, to take partnership, to take ownership and be part of the Garfield.”

That is the goal of the block party during the re-opening event, set for Friday, Sept. 30. It will include an open house to showcase the new lobby, food and refreshments, a performance by Bay Country Gentlemen and a ribbon-cutting. The block of High Street on which the theatre sits will be closed to traffic so surrounding businesses and restaurants can take part.

The following night, there will be a performance by John Davidson. Tickets will be required. Davidson is a renowned singer and actor who has appeared on the Broadway stage and a number of television shows. Garfield worked with Davidson on “State Fair,” of which Davidson was a star. “I’ll never forget walking down 45th Street (in New York City) and having John Davidson throw water balloons at me from the dressing room window,” Garfield said.

Matthews is extremely excited to welcome Davidson to the Prince. “I just don’t think we’ve ever had anybody the caliber of this person perform in this theater,” she said.

The evening will also include a cocktail party beginning at 6:30 p.m., during which the Dick Durham Trio will perform, and champagne and desserts during intermission.

Garfield, who attends as many Prince events as he can find time for, will be on hand both nights. 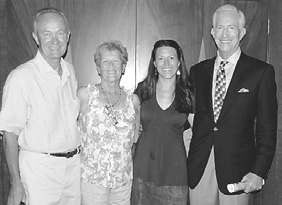 Philip Dutton, chairman of the theater’s board, has high expectations for the Prince’s future. “The Garfield Center will be like the Lincoln Center is to New York. … It will be the hub of culture in our community for years to come, for our grandkids, thanks to Matt and all the other people who contributed to make this happen.”

Lucia Foster, the theater’s executive director, is proud of the performances and work with the community already happening at the theater, particularly with local kids who are being introduced to the stage for the first time through programs at the Prince. But she is anxious to see just how far the theater’s reach can stretch with Garfield’s help. “The mission stays the same, but the impact continues to grow. A lot of people value what we are doing and it gives us a platform to do even more,” she said.

Foster said the kids in the theater’s Playmakers Summer Camp program have been told who Garfield is and why he would give such a generous donation. She said the children now realize “they are important enough to invest in.”

Garfield agrees the kids are the impetus behind his gift. He had the opportunity to stop by the theater Friday (July 8, 2011) for a performance by Urban Artistry, a group performing various styles of urban dance. The Playmakers campers were in the audience.

He said, “It was thrilling to be in the theater and watch the kids enjoy the breakdancing demonstration and to see how enthusiastic they were … that’s what it’s all about.”