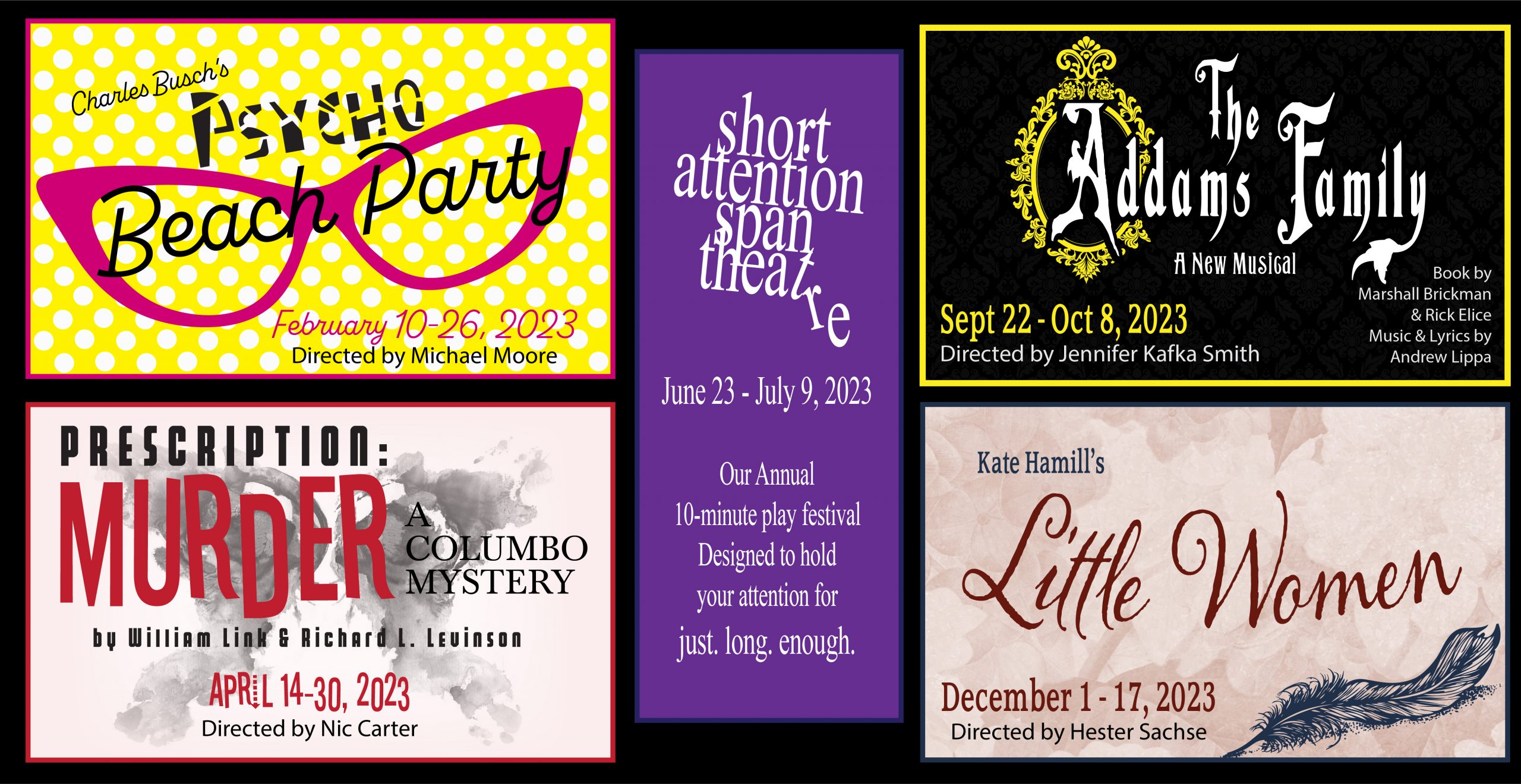 From modern cult comedy to the classically familiar to an over-the-top creepy new musical, the Garfield Center’s exciting 2023 season will provide audiences with all the feels we expect from live theatre.

The new season opens February 10, 2023, with Psycho Beach Party by Charles Busch. Performances will run weekends until February 26. An instant cult hit that resulted in its 2000 film version, imagine the fun of living in 1962 Malibu Beach, where we might rub elbows, surf and dance with Frankie and Annette at a beach party. Chicklet Forrest is your average tomboyish Gidget with one crazy secret: she is living with several hilarious split personalities. Meanwhile, dark and mysterious murders seem to be happening to the people around her and let’s just say her mother is a complete ‘drag.’ Her most dangerous personality is the vixen Ann Bowman, who loves to command the stage to get what she wants. A colorful array of supporting characters tackle everything from friendship to sexuality in a parody spoof that keeps the laughs coming. The comedy will be directed by Michael Moore.

Next up is Prescription: Murder by William Link & Richard L. Levinson. Performances will run weekends from April 14 through 30, 2023. With it’s characters and style providing the inspiration for the TV series Columbo, its theatrical predecessor Prescription: Murder tells the story of a brilliant psychiatrist and his mistress who hatch a plot to murder his neurotic, possessive wife. The execution of their plan and the creation of their perfect alibi depends on a bizarre impersonation. Lt. Columbo must engage the psychiatrist in a duel of wits until the doctor succeeds in having Columbo removed from the case. However, it is the mistress who proves to be the weak link that leads to a trap and a surprising climax! Nic Carter will direct the production.

Short Attention Span Theatre returns to the Garfield Stage on June 23 for yet another annual installment of trailblazing new short plays that always features a cast of lovable local GCA favorites. Typically premiering new 10 minute plays, many times by local playwrights, SAST is a local, well-loved tradition. Performances will run weekends through July 9, 2023. Mark Sullivan will once again produce SAST.

September brings us the irreverently creepy and hilarious musical, The Addams Family. Embracing the wackiness in every family, the story focuses on every father’s nightmare: Wednesday Addams, the ultimate princess of darkness, has grown up and fallen in love with a sweet, smart young man from a respectable family – a man her parents have never met. And if that wasn’t upsetting enough, Wednesday confides in her father and begs him not to tell her mother. Now, Gomez Addams must do something he’s never done before – keep a secret from his beloved wife, Morticia. Everything will change for the whole family on the fateful night they host a dinner for Wednesday’s “normal” boyfriend and his parents. Opening September 22 and running through October 8, 2023, Jennifer Kafka Smith will direct the production.

And closing the season will be Kate Hamill’s critically lauded adaptation of Little Women, running weekends from December 1 through December 17, 2023. The Wall Street Journal called it “an ingenious compassion of Alcott’s novel that is by turns funny and painfully poignant…it touched me to the heart.” The story brings fond familiarity: Jo March isn’t your typical Victorian lady. She’s indecorous and headstrong, and one day she’s going to be a great American novelist. As she and her sisters grow up in the middle of the Civil War, they strive to be brave, intelligent, and imaginative young women. But as adulthood approaches, each sister must negotiate her private ambitions with society’s expectations. In a war-torn world defined by gender, class, and personal tragedy, Jo March gives us her greatest story: that of the March sisters, four dreamers destined to be imperfect little women. The production will be directed by Hester Sachse.