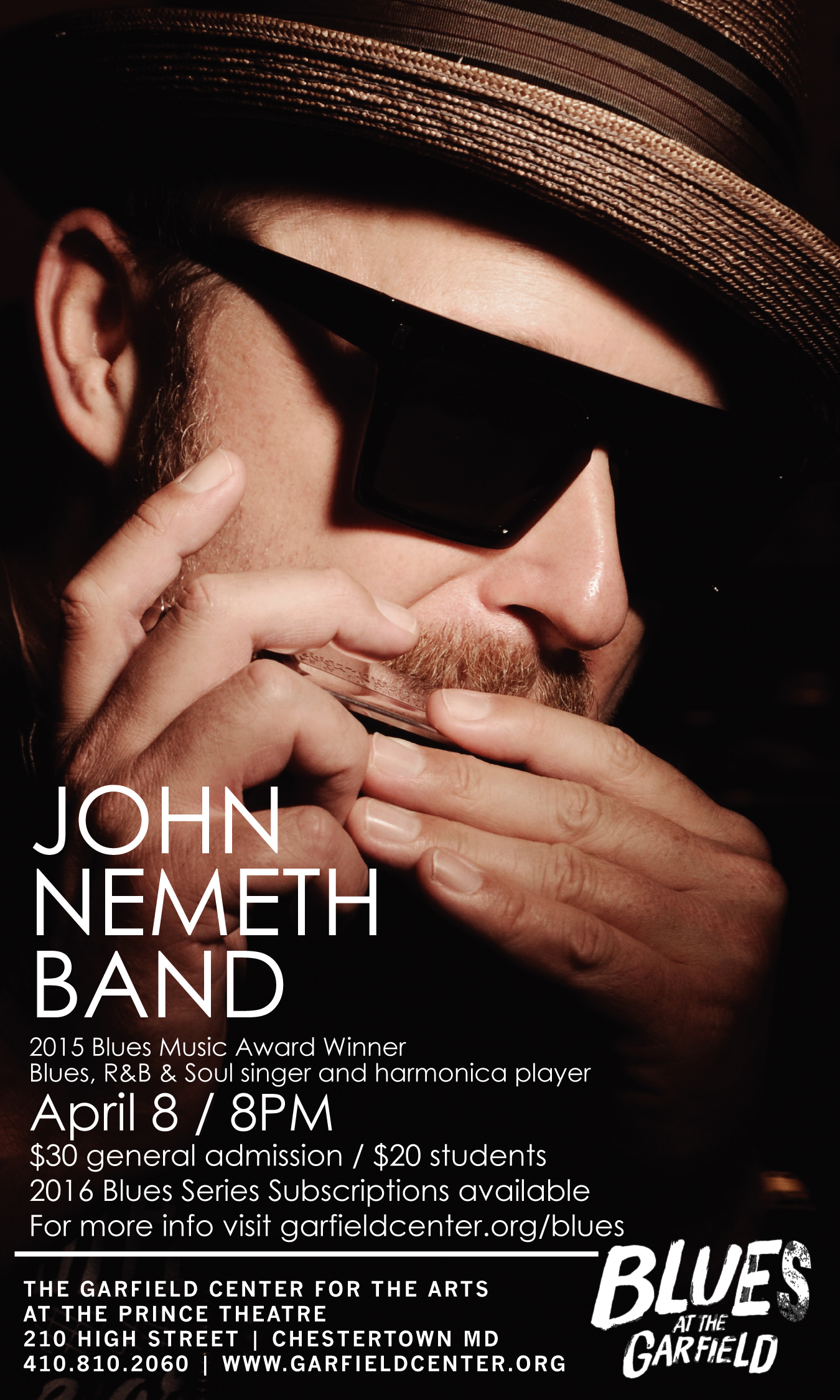 BioVideoWebsite
Boise, Idaho is hardly the place anyone would conjure up as a hotbed of soul music.
But for John Németh, it’s where his love for the genre began—and the starting point for a journey that’s taken him from his first gigs fronting a teenaged band to five Blues Music Award nominations in 2013 alone.

It’s where this preternaturally talented son of a Hungarian immigrant gained his early chops on the harmonica, building on the style of rootsy heroes like Little Walter and Sonny Boy Williamson. Németh’s first paid performance came in 1991, when he was hired to perform drinking songs for a pinochle luncheon held by the Catholic Daughters of America before setting his sights on the Boise club scene, where, for nearly a decade, he played seven nights a week at local pubs, taverns, joints, and parties.

After opening a show for Junior Watson, Németh was tapped as tour opener for the guitar great, a gig that took him across the United States, to Scandinavia, and into the recording studio for his 2004 solo debut, Come And Get It, featuring Watson. When Németh’s girlfriend decided to relocate to California, he knew he couldn’t lose her, so he packed up the house and traveled west. It was an astute move: shortly after his arrival, Németh was signed by Blind Pig Records to a three-album deal. He also earned critical acclaim placing him in, as Nick Cristiano of the Philadelphia Inquirer put it, “a cadre of young and relatively young artists such as James Junter, Eli ‘Paperboy’ Reed, and Sharon Jones.”

“I learned a lot living in Oakland and San Francisco,” Németh says, “from recording and performing with Elvin Bishop to hearing Jimmy Hughes perform. Oakland is like a truly southern city, only it’s on the west coast. It wasn’t until after I arrived that I discovered that so many great songs I love actually originated there.”

In early 2013, Németh traded his life on the west coast to settle down in Memphis, Tennessee. He and Jaki, that girlfriend he followed to California, had married and started a family, and Memphis made sense for multiple reasons: It’s centrally located for touring, the cost of living is inexpensive, and the river town is the historical ground zero for American roots music.

“I moved to Memphis because it is the epicenter for soul and blues,” Németh confirms. “The wealth of knowledge runs deep in the instincts of its musicians and its studios.”

The 2000-mile trek south was wild. Németh’s 26-foot Budget rental truck broke down in the middle of the night in Flagstaff, Arizona, where he had to unload the entire truck and reload a new one on the side of the road. A scant two days after that, he was in Memphis and, as improbably as it sounds, in the recording studio.

Németh landed in the perfect place: Electraphonic Studio, home of producer and musician Scott Bomar, who composed the film scores for Hustle & Flow and Black Snake Moan and produced Cyndi Lauper’s Memphis Blues. Backed by the Bo-Keys, Bomar’s group of veteran Memphis performers who made their names backing the likes of Al Green, O.V. Wright, Rufus Thomas, and the Bar-Kays, Németh quickly laid down thirteen tracks that, as he describes it, “live in the style like I live in the style.” The tapes from that session caught the ear of manager Charles Driebe, who took the record to Denby Auble of Blue Corn Music. The Americana/roots music label signed Németh that year, adding him to a roster that boasts the likes of Ruthie Foster, Gurf Morlix, and Steve Forbert.

Memphis Grease, the long-awaited follow up to Németh’s fourth solo studio release, 2010’s Name The Day!, embodies everything that sets this artist apart from the revivalist pack: it’s innovative and unique while epitomizing the absolute best of the genre. It’s a deeply forged amalgamation of scorching harmonica-driven blues and sweet blue-eyed soul ala the Box Tops or Roy Head, delivered via two fistfuls of originals and a trio of carefully chosen covers, including Roy Orbison’s “Crying,” reinvented here as a slow-burning soul number that matches anything that came out of circa-late 1960s’ Muscle Shoals.

The album title itself is evocative of Németh’s journey to Memphis. The soul-blues scene he fell into in the Bay Area is historically referred to as “Oakland Grease,” and a pair of Oakland’s “greasiest” artists, guitarist Lowell Fulson and pianist Jimmy McCracklin, journeyed south to record two of their best, if often overlooked albums: Fulson’s funky psych-blues In A Heavy Bag and McCracklin’s soulful High on the Blues. For Németh, Memphis Grease is a natural concept that marries the techniques he honed in the Bay with the intuitiveness that flows between him and the Bo-Keys.

“When it comes to more traditional styles of music, people expect to hear a tribute record. But you can get into a real rut if you’re just doing rewrites,” Németh says. “We’re creating fresh music here. Our arrangements sound just like they would back then, but what we’re doing is so much more innovative.”

Plus two more concerts to be announced!