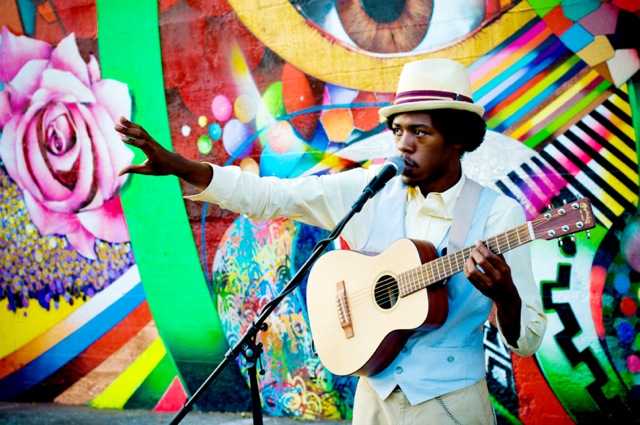 FROM: Lucia Foster, Garfield Center for the Arts

Christylez Bacon takes the stage as the Garfield Center’s final performer in the summer Multi-Cultural Performance Series, Friday, July 26 at 1pm.  Christylez Bacon (pronounced: chris-styles) is a GRAMMY Nominated Progressive Hip-Hop Artist and multi-instrumentalist from Southeast, Washington, DC. As a dynamic member of the progressive hip hop movement, he brings innovation to an art form already known for melding varied urban musical styles. Bacon adds a new flavor to the mix by harmonizing musical genres from around the world in a multi-instrumental exploration of beat box (oral percussion), rap, go-go, classical music and beyond. He frequently performs with artists of diverse backgrounds as part of what Bacon calls his “mission towards cultural acceptance and unification through music.”  By building cross-cultural connections, these presentations help students gain insight into the universality of artistic expression and encourage their direct participation in the performance experience through the use of call and response.

According to The Washington Post’s reporter, Curt Fields, “Christylez Bacon offers well-written tales and observations about everyday life that flow smoothly over jazz-influenced tunes…” He is the recipient of multiple Wammy Awards (Washington Area Music Association,) the Montgomery County Executive Award for Excellence in the Arts, and has been honored as a 2012 “Library Superhero” by Friends of the Library, Montgomery County.

Christylez has been a featured performer at the National Cathedral, The Music Center at Strathmore, The Kennedy Center’s Millennium Stage, and was the first Hip-Hop artist to be featured at the Smithsonian Folklife Festival. “Christylez Bacon is a consummate performer and a delight for collaborations with artists of different genres. With his background in hip hop, his version of Pachelbel’s Canon in D is brilliant, as is his beatbox accompaniment to old-time banjo music. He’s a true musical Renaissance man!” – cites the Education Coordinator at Strathmore Performance Center.

Christsylez Bacon’s performance is made possible thanks to the Hedgelawn Foundation, which underwrites an annual multi-cultural summer series for youth and families. Tickets are $5, group rates are available. For more information about Bacon’s July 26th performance, and other events at the Garfield Center for the Arts, visit www.GarfieldCenter.org or contact the box office at 410-810-2060 or boxoffice@garfieldcenter.org